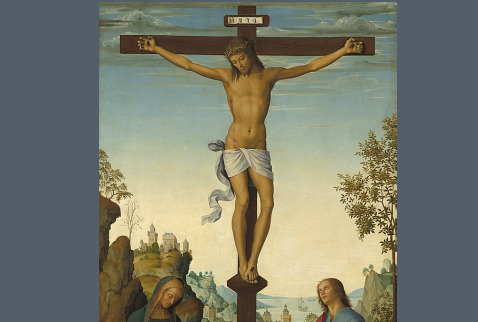 JESUS- THE DEATH OF JESUS

John 19: 14-16 states; It was the day of Preperation of the Passover; it was about noon. "Here is your king," Pilate said to the Jews. 15: But they shouted, "Take him away! Take him away! Crucify him!" "Shall I crucify your king?" Pilate asked. " We have no king but Caeser," the chief priests answered. 16: Finally Pilate handed him over to them to be crucified.

John 19: 28-30 states: Later, knowing that everythinghad now been finished, and so that Scripture would be fullfilled, Jesus said, "I am thirsty." 29: A jar of wine vinegar was there, so they soaked a sponge in it, put the sponge on a stalk of the hyssop, and lifted it to Jesus' lips. 30: When he had received the drink he said, "It is finished." With that he bowed his head and gave up his spirit. (NIV)

This painting is called: Christ on the Cross by Pietro Perugino